Where there is a stack of bones, there is a story. Some tales are mysterious, like the walls in Belgium that are made completely out of legs. Others are terrifying. From predators hoarding human bones to warriors abandoned in a field, here are the most bizarre bone collections of all time.

10 Times Bones Gave Rare Glimpses Into The Past 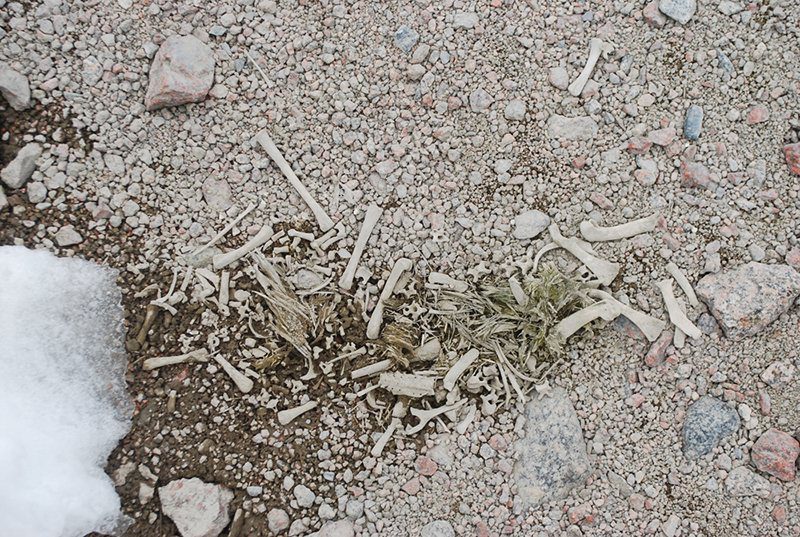 In 2020, scientists came across penguin bones that did not make sense. Found at Cape Irizar near the Antarctic ocean, no penguin had called that spot home since the 1900s. Initially, the remains were thought to belong to an unknown modern colony but when the truth dawned, it was completely unexpected.

The bones—and bodies—were at least 800 years old. At the oldest, the remains were estimated to date back 15,000 years. Over time, generations of penguins had used the site and a lot of bones were collected as some died of natural causes. Others were frozen whole and were only exposed due to fluctuations in the levels of ice cover. They were so well-preserved that they fooled the scientists into thinking that they had just died recently.

Lemurs today are small but 2,000 years ago, they were the size of gorillas. These big guys are now extinct but in 2015, divers discovered a large graveyard of bones inside a cave in Madagascar. Among them were hundreds of giant lemur skeletons.

What made the discovery so unique was both the number of lemurs that were found and their condition. Normally, fossils are scattered or so incomplete that there is just a skull or a few ribs left to study. But some of the lemur skeletons were so perfect and whole that it gave researchers an unprecedented look at their anatomy. 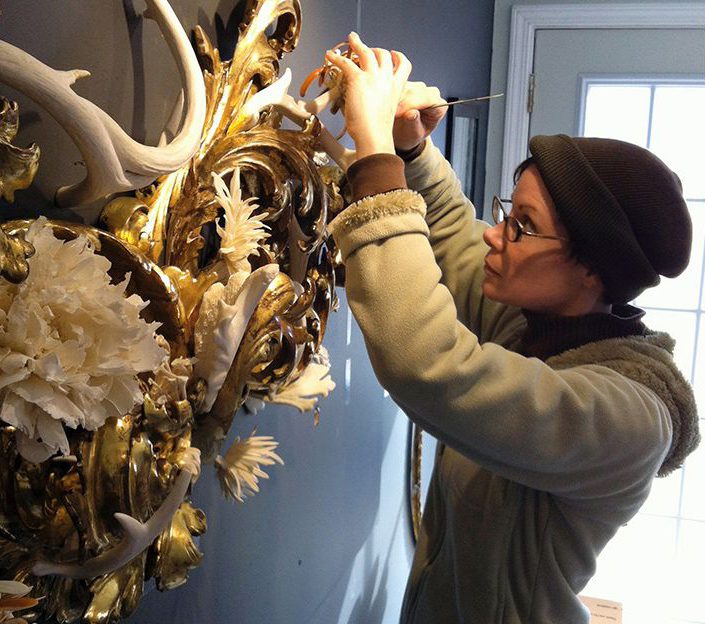 In 2016, many visitors to the Renwick Gallery in Washington, D.C. saw the work of Jennifer Trask for the first time. But she was no noob. Trask has been making the same trademark and beautiful art for over 20 years.

Her art materials might creep some people out, though. They consist of blood, precious metals and bone. Depending on what she’s making, her artwork includes the skeletal remains of deer, snakes, giraffes, camels, chickens, and other creatures. Anything from teeth, ribs, vertebrae to antlers goes.

While the collection sounds gory, it is not. The work has a baroque beauty that many art lovers find appealing. The pieces range from large wall decorations to tiny bones crafted so skillfully that it resembles a real flower, fragile petals and all. 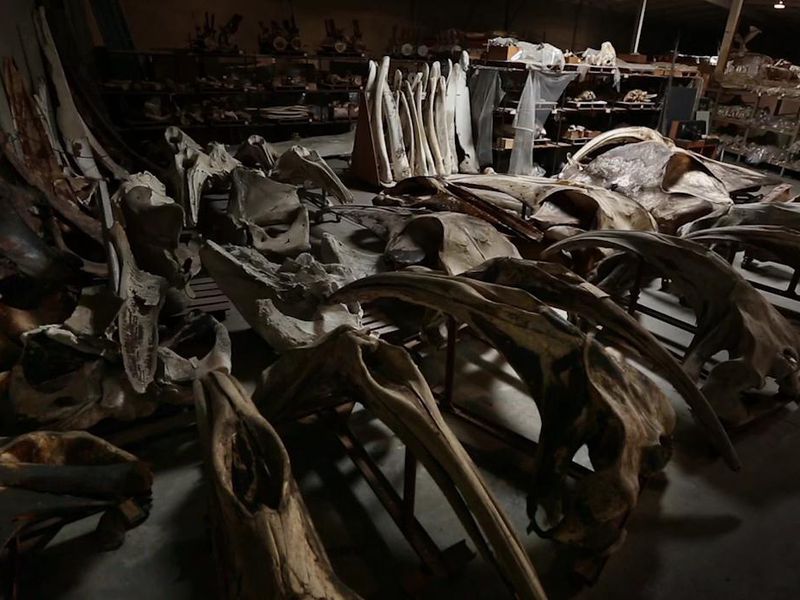 In the middle of Los Angeles is a warehouse. Inside is over 5,000 whale and dolphin skeletons (and countless jars packed with organs and other gory stuff). Owned by the Natural History Museum of Los Angeles County, the collection is the second largest hoard of its kind. Only the Smithsonian is sitting on more whale bones.

One might wonder why a museum is in the habit of gathering thousands of bones when it has no intention of displaying any of them.

As it were, researchers can learn more about a species when they have numerous individual animals belonging to that group. Another purpose of the warehouse is to solve the enduring mystery of why marine mammals sometimes die off in droves without a clear cause. This is also why all dead dolphins and whales found in the area go to the warehouse for an autopsy. 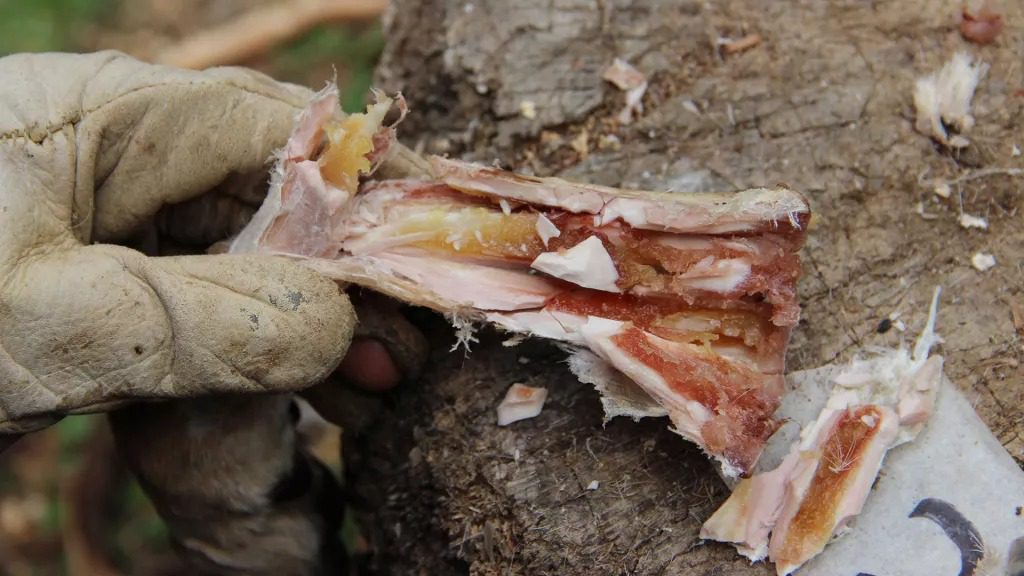 Hundreds of thousands of years ago, the fridge was not yet born. For this reason, it was assumed that following a successful hunt, people ate all parts of the animal almost immediately. But in 2019, that view changed.

Near Tel Aviv, around 80,000 animal bones inside Qesem Cave revealed that ancient humans had their own spin on canned foods. They wrapped the leg bones of a deer in the creature’s skin to preserve the marrow for a later time.

Incredibly, when researchers copied this technique they found that wrapping certain bones with deerskin kept the marrow inside fresh and nutritious for weeks.

5 A House Made Of Mammoths 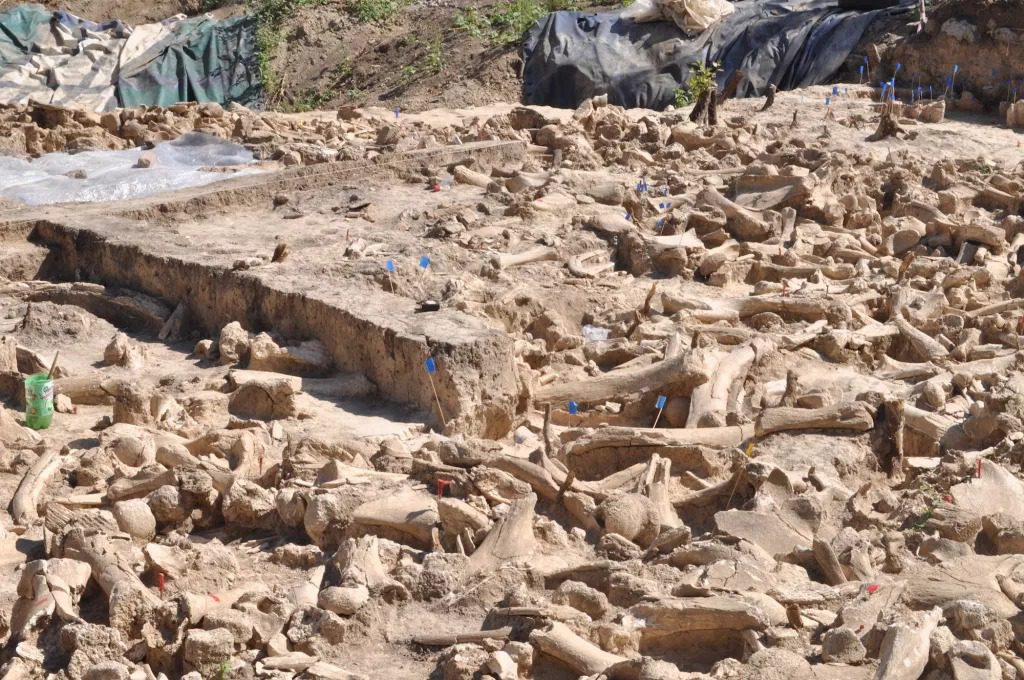 In 2020, a massive trove of bones was found in Russia. Dating back to roughly 20,000 years, the collection was clearly artificial and big enough to suggest that the bones had been used to build a structure. To this day, it remains unclear whether the building was somebody’s home, a storage area or a temple.

All that remains today is a bone circle measuring 36 feet (11 meters) in diameter. The Ice Age builders used bones from at least 60 mammoths and other animals. The latter included foxes, horses, bears, wolves, and reindeer.

One of the weirdest discoveries was that, for some unknown reason, the community constructed the place while the meat was still attached to some of the bones. The place must have reeked six ways to Sunday. One can be forgiven for thinking that this is certainly not the best habit when it comes to real estate. But apparently, it served enough purpose not to be unique. There are 70 similar—and equally enigmatic—structures from the same period across Russia and Ukraine. 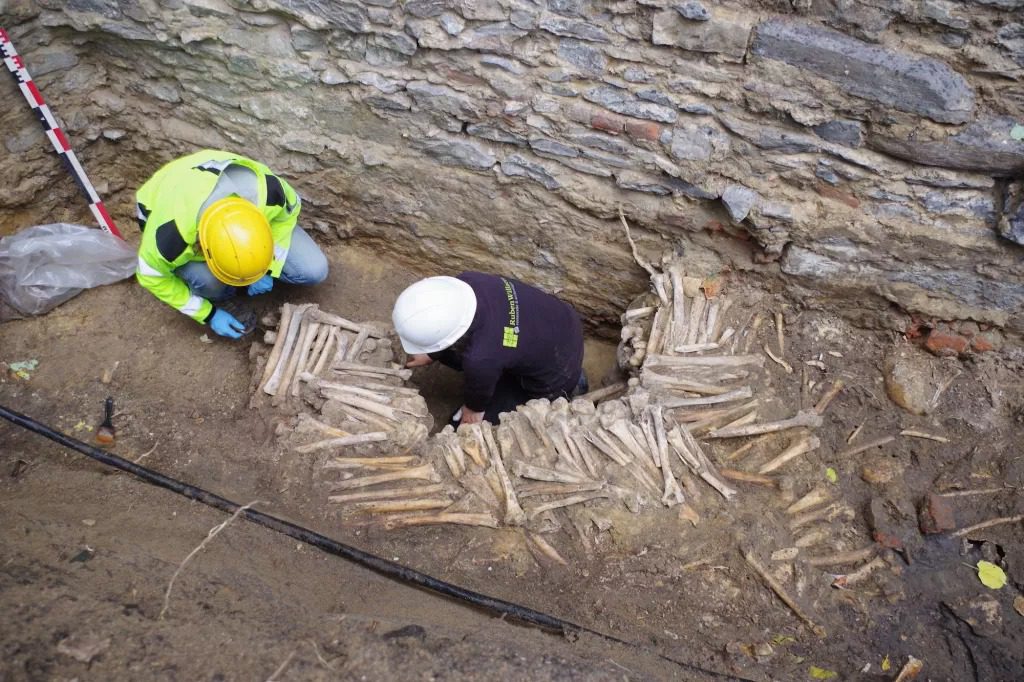 Ancient people loved their walls. These structures kept the enemy out and the sheep inside. But a series of nine walls in Belgium was unlike anything that experts have ever seen before in this particular country. Instead of using bricks or normal building materials, the walls were created by stacking human shin and thigh bones together.

No small bones were found. So, body parts like hands, feet and even spines were nowhere to be found. There were also no children. However, the site did contain other body parts. The lanes that ran like rows between the walls were filled with skulls, many of them shattered.

It is believed that a nearby church, Saint Bavo’s Cathedral, emptied its graveyard twice sometime after the 16th century. But nobody is sure why. There are no other human walls in Belgium to help explain why this community felt the need to build walls with their dead instead of placing the bones in a more traditional ossuary (a stone building that houses skulls and long bones near a graveyard). 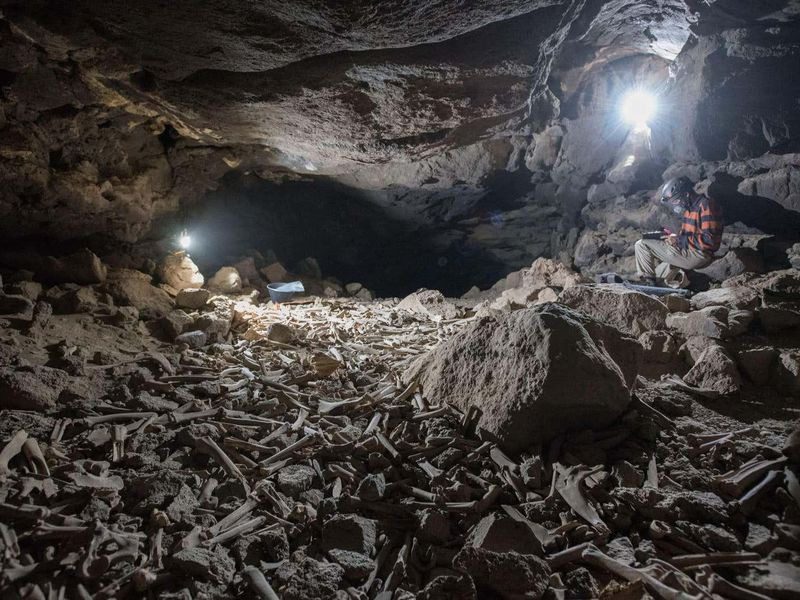 In Saudi Arabia, there is a cave with a horrifying carpet. As far as the eye can see, bones are packed tightly together. Numbering in their thousands, the bones belong to humans, camels, horses and roughly 10 other species.

Luckily, this is not the work of a serial psychopath. In 2021, after experts found tooth marks on the bones, it became clear that hyenas have been using the place for thousands of years to stockpile bodies.

There is a chance that the spotty carnivores are still utilizing the cave as a pantry. In the early 2000s, people tried to enter the site but they beat a hasty retreat after hearing what sounded like the snarls of hyenas.

2 A Herd Of Opal Dinosaurs 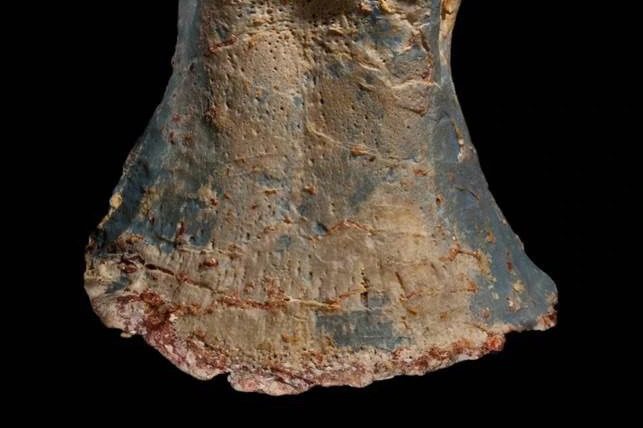 How Australia discovered its first dinosaur herd remains a remarkable story. In the 1980s, a man called Bob Foster worked at an opal mine in New South Wales when he and several other workers kept finding odd stones that looked like horse hooves.

The other men kept smashing the rocks to look for veins of opals but Foster began to wonder. Why did all the stones have the same shape? His gut instinct told him that the miners were devastating countless dinosaur bones so he scooped up two bags of “hooves” and took them to a local museum.

He was right. Not only did it turn out to be a new species of plant-eating dinosaur but Foster had found a whole herd of them. One animal was nearly entirely intact, making it the world’s most complete opalised dinosaur. The hooves were not really hooves. They were the toe bones of the creatures. 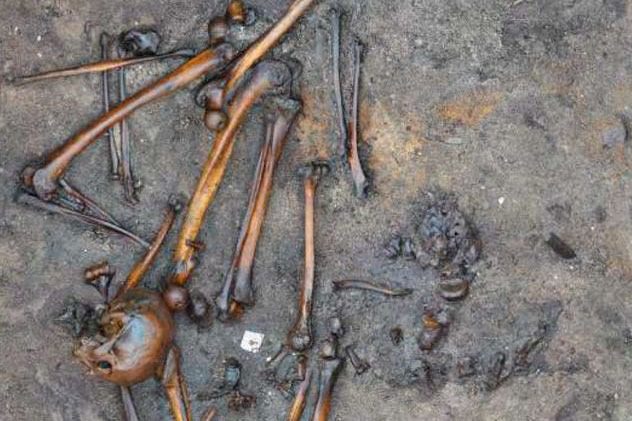 About 2,000 years ago, a field in Denmark witnessed a bloody battle. On the more mundane side, it was the earliest evidence of large-scale conflict in the area but the thousands of bones also revealed what happened after the fighting was over. More specifically, what the living did to the dead.

Hundreds of men perished at Alken Enge and their bodies were also abandoned there, so to speak. Instead of being given a funeral, animals and the elements were allowed to ravish their corpses for as long as a year.

After that, their bodies were systematically chopped up, scraped clean, and sometimes the same type of bones would be strung together on a stick (for example, a bunch of pelvis bones). Skulls were also crushed. Most of the remains were then thrown into a nearby lake.

Jana earns her beans as a freelance writer and author. She wrote one book on a dare and hundreds of articles. Jana loves hunting down bizarre facts of science, nature and the human mind.