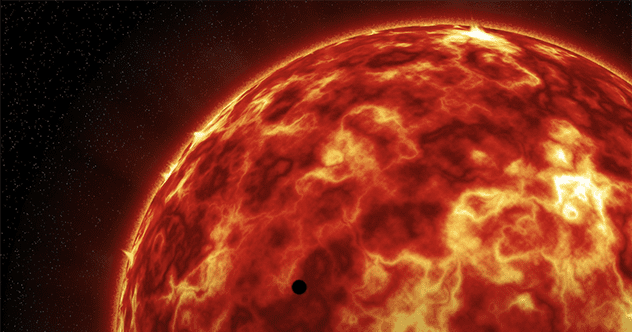 As we look to the stars, a common hope is that we will find planets like our own, able to support life as we know it. However, a search for habitable Earth-like planets is one that takes a lot of patience, as conditions needed to support life are rare. In fact, the space beyond our planet is home to some of the least hospitable locations you could dream of. As the unlikely search for planets likely to sustain life goes on, here are ten planets with conditions far too dangerous for any kind of life.

10 Hypothetical Planets That Could Exist In Our Solar System

The search for Earth-like planets is one scientists will likely always be working on. In 2013, two research teams identified a planet called Kepler-78b which is about the same size, density, and composition as Earth. It has a radius only 1.2 times that of Earth’s, and it is rocky. The only catch is that it is so unnaturally close to its star that its rocky composition has been entirely liquefied. With one of the tightest known orbits, it circles its star in just 8.5 hours. As Earth-like as this planet is in some aspects, there is no way anyone could survive on this molten speed ball.

Gliese 581g is one of the best candidates for a life supporting planet. It is nearly Earth sized and it orbits within its star’s Habitable Zone, which is the area around a star where planets could have conditions necessary for supporting life as we know it. However, this planet is tidally locked, meaning the same side of the planet is always facing its star as it orbits. This means the most habitable area is the sliver of the planet directly between day and night. Though this planet is technically habitable, the two sides of this planet offer incredibly deadly alternatives. Either side of Gliese 581g is in either frigid darkness or perpetual burning daylight. Traveling too far in the wrong direction here could result in either a frozen grave or a burnt one.

HD 189773b is an exoplanet about the size of Jupiter, and it is 30 times closer to its star than Earth to the sun. This planet’s atmosphere is slowly evaporating away because of the intense X-ray and Ultraviolet radiation from its star, losing around 100 million to 600 million kilograms per second. HD 189773b is also the first exoplanet that scientists have been able to confirm the color of. The planet was determined to be blue, much like Earth. Though this exoplanet’s color comes from light refraction through silicate particles in the air, which due to the planet’s heat, may condense into glass. With estimated winds of 4,000 miles per hour (6,437.4 km/h), the glass in HD 189773b’s atmosphere is whipped around like a sideways rainstorm. With glass shooting through the air, a trip to HD 189773b would be like a trip through a paper shredder.

This system of three planets experiences almost identical situations to one another. The nighttime skies of PSR B1257+12 b, c, and d are lit up by amazing auroras like the Northern Lights on Earth. However, this is because of the massive amounts of radiation constantly being rained down on the planets by their star. This is due to the star itself, which has become a pulsar. A pulsar is a star that has undergone a supernova, leaving a much smaller, much more dense dead star that rotates rapidly, emitting awesome amounts of radiation. It is speculated that PSR B1257+12 b, c, and d are second generation planets, meaning they are formed out of the remnants of planets destroyed by the star’s initial supernova. A vacation to either one of these three pulsar orbiters would have anyone dying of radiation sickness.

Nothing beats a nice trip to the sauna, unless of course that sauna is an entire planet of inescapable steam. GJ 1214b is a super-Earth planet about 6 times as massive as Earth and appears to be a real life water world with an interior likely made up of ice. Though the surface is made up of water, it would not appear as familiar as our planet’s oceans. GJ 1214b would likely not have liquid water, but due to heat and atmospheric pressures, it would instead have layers of hot ice or even water acting in a plasma state. A day trip to this steam bath world would open your pores up just before killing you with steamy burns.

Officially named HD 209458b, this hot-Jupiter type planet has been dubbed Osiris after the Egyptian god who lost part of his body after being cut up by his brother. This name comes from the fact that this is the first exoplanet discovered with an evaporating hydrogen atmosphere. With the trail of evaporating hydrogen leaving off into space, the oxygen and carbon surrounding the plant has been stretched into a shape similar to that or a rugby ball. Even with the presence of oxygen in Osiris’s atmosphere, the evaporation and atmospheric blow off would suffocate you pretty quickly, but not before you burn up in the almost 2,000 degree Fahrenheit (1093.333 Celsius) heat.

Space is already black enough, but the darkest planet discovered, TrES-2b is almost completely black with an eerie red glow. TrES-2b is Jupiter sized, but its atmosphere is proposed to be made up of vaporized sodium and potassium, or gaseous titanium oxide which are all light absorbing, opposed to the ammonia clouds in Jupiter’s atmosphere responsible for reflecting light. This is because this planet is 30 times closer to its star than Earth to the sun, heating the atmosphere to over 1,800 degrees Fahrenheit (982.2222 Celsius). This incredible heat is also responsible for the red glow the planet emits. If you’re afraid of the dark, not even a flashlight could help calm your fear on this planet, so you’ll be frightened right up until the moment the lava-hot atmosphere burns you up.

This exoplanet is probably the closest thing we will see to a giant egg being cooked in space. In 2008, NASA scientists identified this strange extra-solar planet orbiting so close to its sun-like star that it is being stretched by the sun’s gravity into the shape of an egg. This planet, designated WASP 12-b, is a gas giant about twice the size of Jupiter. It flies around its sun so incredibly close that it completes a revolution in just 1.1 Earth days, and the heat is so intense it can reach 4,000 degrees Fahrenheit (2204.444 Celsius). As its sun tugs on the planet, scientists have noticed a cloud of material being stripped from the planet. WASP-12b is literally being consumed by its star as the massive gravitational force tears the atmosphere from giant planet. It is estimated that WASP-12b will be fully devoured within 10 million years. Sticking around on this planet would mean being cooked alive and then eaten by the sun like a plate of scrambled eggs.

2004 marked the discovery of 55 Cancri e , a tidally locked planet around eight times as massive as Earth. Later named Janssen, this planet has baffled scientists as a bit of a wild card of potential deadly threats. The nature of Janssen is a bit of a mystery, with potential explanations of its existence being a planet-wide coat of lava, an Earth-like atmosphere with the density of Venus’s atmosphere, an exclusively day-side atmosphere, or even an ultra hot water world. One thing is certain however, no matter the nature of this planet, it is still incredibly hot. As typical for tidally locked planets, Janssen’s day side is burning hot at 4,200 degrees Fahrenheit (2315.556 Celsius). However, the night side is not frozen, but instead it comes in at half the heat of the day side, something a difference you won’t really notice as you are cooked alive. You may not know exactly what deadly horror awaits when visiting this planet, but the possibilities are only scary until the planet’s heat kills you.