Home TOP Listicles Top 10 Animals that Can Kill a Lion 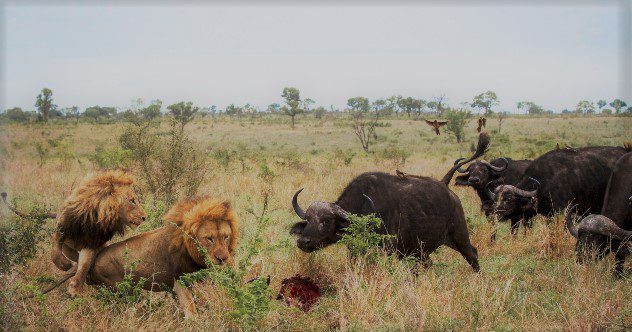 Depending on your context, the lion is the King of the Jungle—or King of the Forest—even though lions don’t live in jungles and the females do all the hunting and killing. But still: the King. And with the crown comes would-be usurpers. You know, like Scar and his hyenas.

Though most species know their place, rightfully subservient to the royal lion, some have grown bolder. Some would plot to use their size, their venom, and even their spears to claim the throne… and it would totally work. As fast and powerful as lions are, there are a lot of animals that best them in the wild. And though lions technically have no natural predators, there are plenty of animals that will take advantage of superiors numbers, or target the young, old, or sick, to bring down and feast upon a lion.

Here are ten animals that can, and have, killed lions.

Nile crocodiles are the second-largest reptiles in the world, beaten out only by saltwater crocodiles. Like lions, they are apex predators; no animal actively hunts Nile crocs for food. That’s because no animal is that stupid, not even humans (until guns became available and cheap enough). And even with guns, humans stand little chance of making it out unscathed if a Nile crocodile manages to get a good chomp in. So it’s no surprise that they can, and sometimes do, take on lions.

In fact, there are plenty of recorded attacks from Nile crocs on lions. It’s always through a quick ambush while the lion is drinking from or eating by a waterhole. The sheer number of croc vs. lion attacks forces the question: are lions really apex predators?

Most ecologists (including yours truly, a former ecologist), would say that yes, lions are still at the apex. Nile crocs only hunt them opportunistically, only when they’re desperate, and always prefer slower prey. But the fact remains that Nile crocs eat lions, which is impressive in any context.

You’ve probably heard of black mambas. This is possibly because of Uma Thurman’s character in “Kill Bill,” but more likely because they’re considered the scariest snake in all of Africa. It is the second-largest venomous snake, after the king cobra, and its venom beats the cobra’s both in potency and speed of effect. You can bet that size and venom make even lions fear the mamba, and you’ll be right.

There are multiple recorded cases of black mambas killing lions. The snakes are generally peaceful and only strike when they feel threatened, and likewise, lions know not to tangle with snakes, but no system is perfect. Encounters occur and, as you can see in the embedded video, it doesn’t always go well for the lions.

Hyenas have become a bit of a joke. Whether it’s because of their supposed laughter, their famous portrayal by Whoopi Goldberg and Cheech Marin, their reputations as cowardly scavengers, or their, ahem, unusual genitalia, hyenas are often not seen as fierce predators. Well, the butt of the joke is actually pretty fierce when you get a whole bunch of them to work together. They can kill lions. And a lot more often than you’d think.

It is true that one on one, the average lion would trounce the average hyena. It is also true that no single hyena ever hunts a lion. But lions and hyenas often come in conflict over kills, usually due to lions attempting to steal hyenas’ kills (disproving the common belief), and in their close-knit packs, hyenas often emerge victorious over lions. In particular, spotted hyenas, which are the most aggressive species of hyena, tend to ‘mob’ lions, overwhelming them with numbers and aggression. To lions, hyenas are no laughing matter.

Rhinos are complicated. On the one hand, they’re some of the easiest poaching targets out there, as they’ll often laze around watering holes as big, motionless targets. On the other hand, they have no natural predators, not even lions, and all of the top predators in their habitats know to avoid them.

In addition to weighing roughly five times as much as lions, rhinos are also extremely territorial. Unlike crocodiles, mambas, and hyenas, which all actively avoid lions, many rhinos will seek out confrontation if their territory is encroached upon. A quick search for rhino lion encounters will show what the charge of an angry rhino can do to a lion. It isn’t pretty.

This is a weird one, because there is almost no habitat overlap between lions and tigers, with three exceptions. First, their habitats overlapped considerably in the recent past, but overhunting and habitat modification by humans has drastically reduced their habitat ranges. Second, there is still an overlap, albeit small, in India’s Gir forest. The two cats both dwell here, though the two species stay fairly separate.

This brings us to number three: captivity. For thousands of years, the two largest cats have been kept as pets, trophies, attractions, and even as gladiators. In their long history together, the two cats have been pitted against each other again and again. Though opinions are mixed, the general consensus is that tigers, which are larger and pound for pound stronger than lions, are more likely to come out ahead.

It’s no surprise that elephants, the largest living land animals, can take down lions. From sheer size alone, elephants have no natural predators. Only the youngest and sickest elephants need fear predation, and even then, it’s not a meal most predators would choose.

Indeed, there have been hours and hours of footage captured of scuffles between lions and elephants. Usually, it is territorial disputes with extremely desperate lionesses targeting baby elephants. But it more often than not ends up with injured, retreating lions. Interestingly, a few select prides of lion have taken to hunting elephants, but only with number advantages of roughly 30 to 1.

When you think of African wildlife, you tend to think of anything but the African buffalo, or Cape buffalo. It’s not nearly as famous as the rhino, elephant, hippo, or giraffe. But it’s big, strong, and as mean as can be. That’s why lions only approach buffalo in packs, and even then—the footage speaks for itself.

You’ll be surprised to hear that African buffalo are actually heavier than rhinos on average, longer, and just as tall. In addition, they are famously territorial and generally aggressive, earning the nickname “the widow-maker.” Quoting the Canadian Museum of Nature: “More big game hunters have been killed by African buffalo than by any other African animal… Other than humans, African buffalo have few natural predators and are capable of defending themselves against (and sometimes killing) lions.” Watching a buffalo gore a lion and fight off four others, I’d say that’s an understatement.

It’s hard to top the African buffalo. In fact, when it comes to megafauna, there’s only one animal in Africa that kills more people (and other animals, not for predation): the hippopotamus. A 2014 ABC News article headline reads: “Hippopotamus attack kills 13 people, including 12 children, in boat near Niger’s capital Niamey.” The hippo flipped the boat and killed 13 of its passengers, one by one.

Lions don’t fare any better. Hippos are considered the most aggressive animal in Africa, and unlucky lions who attempt to feed on young calves often learn that firsthand. Moreover, hippos are aggressive enough to take the offensive. They are commonly known to displace any predators in their territory, whether they are hunting or not, by brute force.

No, this isn’t some conservationist warning about the moral void that is poaching—but poaching is bad. So set aside “poaching,” this is different. The traditional hunting of lions by humans—again, not poaching—has been occurring for thousands of years.

For one, the famous Maasai people of Kenya have hunted lions as a rite of passage for countless generations. Ancient Egypt and Greece also hunted lions, which were more abundant in those areas until modern overhunting (in Greece, they are now completely absent). Most accounts of human lion hunting share common practices, such as using bait, sneak attacks, spears, and scent hounds.

It’s true: mosquitos aren’t the coolest animal, or the biggest, fastest, or strongest. But what they lack in… everything likable, they make up for in deadliness. Mosquitos kill more humans than any other animal, by most estimates 750,000-1,000,000 people every year. That’s not just the most kills, it’s more than the next ten runners-up combined. And their deadliness isn’t limited to humans; almost every animal is affected.

Between the roughly 3,500 different species of mosquitoes, they have evolved to preferentially feed on almost every terrestrial animal imaginable. On top of that, mosquitoes have the potential to carry dozens of major and even fatal illnesses. Some of these diseases infect other animals. Basically: it doesn’t matter if you’re a lion, a crow, a ferret, or a human being—mosquitos can kill you. Proving just how much we hate them.