Japan is an ancient country full of deep traditions and strong cultural values. Christmas is a newcomer to the country, with most Christmas practices starting in the 20th century. With no religious ties to the holiday, the Japanese people looked at Western traditions and chose which parts of the season they wanted to copy.

The Japanese are inventive and creative people who put their own twists on the celebration. These often surprise those of us coming from countries that have celebrated Christmas for centuries. Here are 10 different ways they celebrate Christmas in Japan.

Related: 10 Unconventional Christmas Traditions From Around The World

Move over mince pies, turkey, and ham. In Japan, it’s KFC on the menu. Order your Christmas bucket of fried chicken early, or you might be out of luck. December 24th is KFC’s busiest day of the year, with sales up to ten times their normal volume. If you fail to order weeks in advance, you’ll be lining up around the block and waiting for hours. It just wouldn’t be Christmas in Japan without gathering together with the traditional Kentucky Christmas Dinner.

Legend has it that the tradition started with Westerners wanting a bit of home for the holidays. Turkey wasn’t available, so chicken was the next best option. A KFC executive in the ’70s had a brilliant idea. He started a highly successful marketing campaign, Kentucky for Christmas, with ads suggesting a barrel of KFC was the perfect way to celebrate this holiday. The Japanese already loved fried chicken and weren’t sure what to serve for Christmas before this advertising campaign. It was a stroke of advertising brilliance that took off like wildfire.

It isn’t just chicken anymore. KFC also sells wine to go along with your bucket of fried deliciousness. Or you can spring for the deluxe package with ribs or an entire roast chicken and stuffing. There is also a full range of fancy Christmas sides.[1]

9 Christmas Eve Is for Lovers 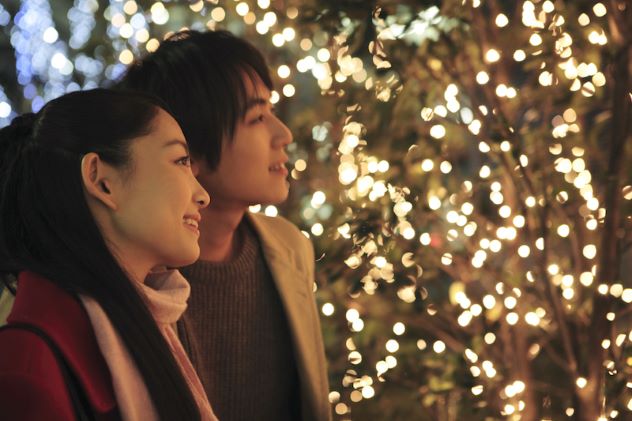 Forget about Valentine’s Day, Christmas Eve is the time to make sure you have a hot date. It is the most romantic night of the year in Japan for young couples. Everyone heads out for a fancy dinner, a stroll to see the lights, and maybe even a brief hotel stay. Nobody wants to be caught without a date on this magical night perfect for love.

Like all Japanese Christmas traditions, this one dates back decades rather than centuries as the Japanese people looked at Western Christmas celebrations and chose to pluck out bits and pieces to make their own. In the glory days of the ’80s and ’90s, when the Japanese economy was flying high, men would book a hotel and restaurant in November before they even found a date. If you waited, you might end up with the girl but no place to go.

The pressure to get a date for Christmas Eve is so great a group of single young men calling themselves “Losers With Women” have marched to protest the celebration of Christmas. (Link 5) “Christmas is just a capitalist scam targeted at happy couples and discriminating against single guys,” the group argues. The group’s Grinch-like efforts to stop Christmas from coming haven’t succeeded yet.[2]

8 “Number Nine” Is the Most Popular Christmas Song

Step to the back of the line “Jingle Bells” and “Silent Night.” In Japan, the most popular Christmas song is “Daiku,” which translates as “Number Nine.” This refers to the final movement of Beethoven’s Ninth Symphony, commonly known in English as “Ode to Joy.” During the First World War, Germans being held captive in Japan performed a Christmas concert including “Ode to Joy.” The song was an instant hit and now is a mandatory staple at end-of-year concerts.

In Osaka each year, “Ode to Joy” is sung by a 10,000-person choir filled with amateurs and professionals alike. In 2020, unable to safely hold the concert in person, Osaka hosted a scaled-down version with 1,000 carefully distanced singers in the auditorium joined by 9,000 others on video singing from the safety of their own homes.[3]

7 Christmas Cake Is Light and Fluffy

Both British and Japanese people get excited about Christmas Cake, but they are talking about two very different kinds of dessert. The British cake is dark, heavy, and dense. It’s commonly called fruitcake in America. Japanese Christmas cake is a light and fluffy sponge covered with white whipped cream frosting and topped with beautiful strawberries. Look at the cake emojis on your phone, and you are sure to find an image of the iconic cake.

After the hard years of WWII when food was scarce and sugar almost non-existent, these cakes became a symbol of wealth and plenty. The white and red remind people of the Japanese flag. You can buy Christmas cakes everywhere leading up to Christmas but come December 26th, they will all be on sale. A Japanese woman who remains single into her late 20s is sometimes rudely called a “Christmas cake” as if her time to be desired has passed.[4]

The Japanese love to push the boundaries of technology in surprising ways, and Christmas lights are no exception. Tokyo has some of the most spectacular Christmas illuminations found anywhere in the world. But perhaps the most unusual lights happen at Enoshima Aquarium, where an electric eel provides the power to light up the Christmas tree.

“If we could gather all the electric eels from all around the world, we would be able to light up an unimaginably giant Christmas tree,” said Kazuhiko Minawa, the man who figured out how to harness eel electricity for Christmas lighting magic. Maybe a giant eel-powered generator isn’t the future of green technology, but it’s still pretty cool to see on a small scale.[5]

5 Flip Christmas and New Year’s Around

Christmas isn’t a religious holiday in Japan. It isn’t even a day off for working people. Parties happen in the evening after a long day at work. Christmas traditions are new and fun without any religious significance. On the other hand, New Year’s is the biggest holiday of the year, full of ancient customs and religious rituals.

Japanese families carefully clean out the house and set out the traditional decorations to signify a clean break from the year past and readiness for the blessings of the year to come. Shrines and temples are jam-packed as everyone rushes to make the all-important first visit within the first three days of the year.[6]

4 Illuminations Are a Big Deal

Many places do light displays at Christmas time, but Japan takes it over the top. You could wander Tokyo for all of December and still not see all the impressive high-tech illuminations. Every department store will have lights inside, but it is the outdoor areas that really shine. Displays are enormous and include lasers, millions of bulbs, and changing light patterns set to music.

Tokyo may have the biggest displays, but other cities around the country will also host illuminations. Snowy Sapporro lights up for the season, as does tropical Okinawa. Bundling up warm and venturing out to see the lights is a popular activity for dating couples, families, and old people alike. It’s an experience not to be missed, but be prepared for crowds. Everybody is doing it.[7]

Are you a little late getting your cards out this year? Tell everyone you’re copying the Japanese. In Japan, it is traditional to send nengajo, New Year’s cards, to all of your friends, family, coworkers, and acquaintances. You can purchase special postage-paid nengajo cards. You don’t want to be late, so put them in the mail, and the post office will hold them for delivery on January 1st.

What if you receive a card from someone you forgot to send to? Quick, put a card in the mail by January 3rd. The first three days of the year all count as New Year’s. Make sure you don’t go past the 7th, though. After that point, the New Year’s season is officially over, and it’s better to send a simple winter greeting instead.[8]

2 Is There a Japanese Santa Claus?

Japanese children love Santa as much as children everywhere. In 2020, more than 80,000 letters to Santa were written by Japanese children and delivered by All Nippon Airways. Santa decorations are everywhere. Outside of every KFC restaurant, there is a Colonel Sanders statue dressed up as Santa to celebrate the season of fried chicken.

But there is also a Buddhist god, Hotei, who many think is a little bit like Santa. Hotei is also fat and jolly. He has eyes in the back of his head so he can see if you are behaving. His name means “clock sack” because he is always carrying around a bag of goodies. He is often called the laughing Buddha, but does he say, “Ho, ho, ho?” [9]

1 Christmas Is Time for Shopping

One thing is exactly the same about Christmas in Japan and the West. It’s time for shopping. Grocery stores and corner shops sell plastic Christmas boots full of treats for children. Departments stores are beautifully decorated and jammed packed with seasonal items and displays.