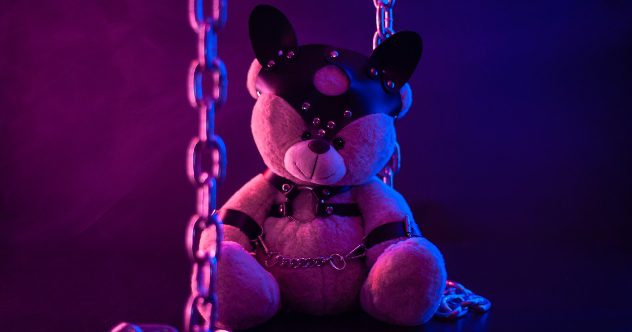 “Sex sells” is a saying that is as old as your grandma. You know the centerfolds and pictures designed to let the imagination run a little wild. For decades, sales have thrived on sexual fantasy.

But in the dot-com era, people now have the option to make their fantasies a reality. As my brother-in-law says, “If you want it, someone is selling it.” This is especially true when it comes to sex toys.

Although these toys are all real and popular in their own realms, they aren’t toys you’re likely to find in your Nana’s sock drawer. So let’s take a look at the top 10 toys guaranteed to scare your grandma.

Related: 10 Interesting Facts About The Rise Of Sex Robots

Aliens can take just about any shape; just look at the movies. And these sex toys are certainly out of this world…far, far out. Of course, they come in basic human forms, but why be boring? You can get designs that look like slime-covered blobs with tentacles. Size isn’t even an issue. Whether you’re into something tall, dark, and slimy or a little green man, there’s an alien sex toy for you.

If tentacles aren’t enough to fulfill your fantasies, then step it up to extraterrestrial egg implantation. Apparently, you can customize the eggs, too. Some people opt for gelatin, ice, silicon, or (for the really adventurous) you can DIY. I guess “live long and prosper” is about to take on a whole new meaning.

Admittedly, this one won’t fit in anyone’s sock drawer, and dolls are nothing new. So you might be asking what makes Harmony so different?

The answer is that she is so much more than the blowup “friend” your socially awkward uncle keeps under his bed. For one, Harmony is a robot, so she can move, smile, and embrace. But she’s also intelligent.

Her AI would be like Alexa if she actually listened to you. So the more you interact with her, the more Harmony will connect with you. What happens if you don’t use her? She gets sad.

Nothing like adding another relationship to your life that you can disappoint.

8 A Digital Chastity Device: What Could Go Wrong?

This one is arguably the least scary at first glance. It’s basically a ring with a tube attached that locks. But the nightmarish situations come into play when you add in the fact that someone else can control the lock with an app on your phone.

It’s enough of a struggle to get my grandparents to understand email, but having Nan ask, “How do I use this app?” would be a drink-inducing experience for everyone.

On the flip side, the entire point of a chastity cage is to build tension before unlocking, so the inability of the elderly to work with technology might be an added bonus.

A word of caution, though. Like any technology, hackers are always a possibility. This actually occurred with the Cellmate device, where hackers locked the devices and held the unsuspecting “member” for ransom. Before the company patched the software, some couples said they either paid or were considering cutting the device off.

This one falls under medical play and definitely is a bit extreme. Although, if you’ve never seen one, you could come up with a bunch of vanilla explanations for what these are used for. Drink mixers, dull nutcrackers, tools for pressure points, all things to keep you in a safe place.

Unfortunately (or fortunately, depending on where you fall on the kinky scale of this), urethral sounds are rods that are inserted into the urethra. At this point, you’re probably asking why on earth would people do this.

The simple answer is because they think it feels good, and it allows for simulation from a different angle on areas that are packed with nerves. Be careful, though—if it’s not done correctly, you can do some serious damage and might end up in the hospital with an actual catheter.

6 Electrified Genitals: Giving Granny the Shock of a Lifetime

Have you ever gone to a chiropractor or physical therapist and been hooked up to a TENS unit? You know, it’s the machine that sends electrical pulses through pads attached to your skin. Basically, it forces your muscles to contract and relax. It’s almost like getting sore muscles massaged after a good workout but without having to get rubbed down by a complete stranger.

Well, there are sexual TENS units designed to work well, especially below the belt. They have pads that can be nuzzled in just the right spots. In theory, this sounds great since I can remember all the times I used a TENS unit on my back or shoulder. But then I remember touching the electric chains in my grandpa’s milk barn, and it’s just not worth the risk.

5 Nothing Cute Has Ever Been Called Goliath

Think about it—David and Goliath, Goliath Spider, Goliath Grouper. All of these have two things in common. First, they aren’t cute. Impressive? Yes. Cute? Not so much. And second, they are huge. So it should come as no surprise that the girth on Mr. Hankey’s Goliath Sex Toy is massive.

Have you ever wondered about (or possibly missed) the sensation of pushing out a baby? Then this is the phallus for you. Just don’t be surprised when you can’t feel anything for a week or so after.

Every owner of a male dog has seen the ever-present (yet surprising) red rocket. And that’s where it stops for most people. For others, curiosity is going to kill their cat. For people who like to live on the “wild” side, there’s actually a semi-hard silicone horse…appendage.

Wanting to get freaky with a four-legged companion isn’t anything new. Historically speaking, there have been several famous figures who enjoy getting “at one” with nature. In fact, Catherine the Great is known for widespread rumors that center around bedding her horse.

This kink is definitely not for everyone. What fantasy is? But if you’re into dragons and horses and dogs, “Oh my!” then Bestvibe has you covered.

Maybe the fantasy isn’t being with a horse. Maybe it’s about being the horse. Want to be a husky Clydesdale or a sleek Arabian? There’s an entire world dedicated to pony play—and a wide selection of toys to go with it.

Ears, tails, manes, bridles, etc., name an accessory or part of a horse, and there’s a made-for-humans option. From horse masks with reins to rubber bits and bridles, there are options for anyone ready to release their inner steed but not ready to publicly proclaim their foal-dom.

For the more adventurous or carefree geldings, there’s a yearly gathering where you and your equine partner can compete in events. Maybe this is the next evolution of the “horse girl” we all knew in school.

Putting a piece of metal in my mouth and pulling a cart around a field sounds a lot more like work than foreplay, but everyone is different. Still, seeing a herd of 10 or more people in full horse regalia galloping down a street would probably make grandma cross to the other side.

2 Arachnophobes, Skip This One

You read that right. You need to take arachnophilia to the max to enjoy this toy. This is one addition to the bedroom that could make your partner’s skin crawl. You literally pull a scorpion out of a small coffin, then send shivers up their spine with this vibrating invertebrate.

Don’t worry, though; it’s a hundred percent waterproof. So jumping in a pool won’t save them from this animated sex toy’s malleable stinger, scurrying feet, or squidgy pincers.

Although the toy’s name, “Death by Orgasm,” sounds like a fun way to go. LoveHoney, the brand behind this Halloween-themed toy, wants to help scorpion-lovers everywhere feel free to make a private oasis south of their equator. If you’re not a fan, you might just want to smash it with a book until it looks like your more like your gram’s cream of wheat.

1 Getting Some Sweet, Sweet Vibrations

Waking up in the morning can be the hardest part of the day. And the world’s been trying to find ways to make it easier for years. Some people use automatic coffee makers, so they wake up to the smell of their favorite roast. Others put their alarms out of reach, forcing them to get out of bed before shutting them off.

And then there’s “The Little Rooster.” This morning helper is a far cry from life on the farm. It’s actually a vaginal alarm clock that helps you wake up on time, giving you a sexual awakening daily. Sounds pretty good…as long as it stays where you put it the night before.

You’re probably rolling your eyes, thinking it sounds more like a rogue wave surfing session. But Wake Sexy, the clock’s brand, has thought of that too. You’re in control of the ending intensity, and the little rooster understands the importance of the build-up to a good sunrise. The rooster starts slow and gradually increases speed over about five minutes.

So next time your grandma asks if you want to start the day with some scrambled eggs, you can say, “I already did!”

Top 10 Celebrities with Doppelgangers from the Past

10 Chilling Memorial Sites of the Witches of Europe

How Things Worked Before 10 Game-Changing Inventions