Ants are an incredibly diverse type of insect. They’re actually descended from wasps and are related to bees as well. They’re probably best known for their complex anthills and social structure based around the well-being of their queen. However, these aren’t cutsie little workers, like Flick and Princess Atta from A Bug’s Life. Ants have evolved over millions of years and have become specialized, deadly, and beyond prolific. With an estimated 22,000 species in existence, they’re bound to get a little freaky here and there. Here are ten of the absolute weirdest and sometimes creepiest species of ants. They aren’t your typical picnic crashers.

As we said earlier, ants are very diverse and can be classified by tribe and genus. The camponoti tribe is one of the most diverse and can actually account for a whole lot of the behaviors on this list. They’re found just about everywhere and have adapted to different conditions and habitats to become incredibly skilled hunters, builders, and survivors. One of the freakiest though is the pitcher-plant dweller. It bores into the carnivorous pitcher plant and waits for other insects to be lured into the large, liquid-filled cavity the plant uses as a stomach. This particular camponotus ant has evolved to be able to scale the slippery walls and survive the digestive liquid inside so that instead of becoming a meal it can feast on the poor souls that would otherwise be plant food.

Camponotus ants are also affected by something known as the zombie fungus. The fungus causes the ant to climb to the highest place it can, where it will eventually die. The ant grows a stem from its head, kind of like a Pikmin, and the stem eventually releases its spores to start the process over again. All you zombie survivalists can relax though. It’s strictly a bug problem so far. 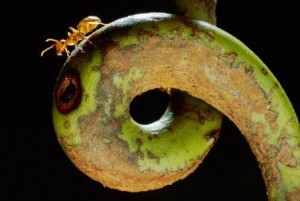 Camponotus isn’t the only tribe worth looking at. Altogether, ants make up between fifteen and twenty per cent of the terrestrial biomass. That’s a lot of ants. Their individual colonies can be huge, spanning many metres and whole fields, but in 2009, scientists discovered that Argentine ants were over super colonies. They were building mega colonies. Genetically similar ants were found in mega colonies spanning 6000km and stretching along whole continent. These ants have actually achieved global domination among the ant world with similar and related colonies in the Mediterranean, Japan, and California. Scientists have said the “enormous extent of this population is paralleled only by human society.” However, don’t worry too much. A whole lot of that proliferation is due to another great talent of theirs: hitchhiking. 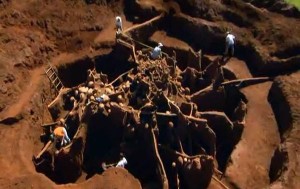 That being said, fire ants have been known to form boats out of their own bodies for the sole purposes of crossing bodies of water. That is to say, one of the most feared ants, known for swarming human beings and biting until they can’t bite anymore, has learned how to successfully learned how to cross water. If that’s not enough, they can also live underwater for some time, since their small bodies work with surface tension to create an air bubble around them from which they can breathe. While crossing an ocean this way is probably a little bit out of their league, it would probably be possible for them cross streams or make their way onto boats for transportation. Not that they’re evolving to take over, or anything. 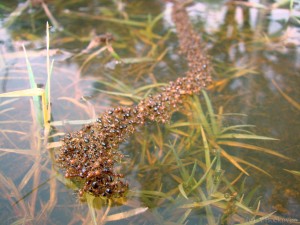 Symbiotic relationships in the wild are fairly common. Bacteria live in our guts and help us to digest our food. Remoras eat the refuse of sharks. Sunfish are groomed by tropical fish and birds who feed on their parasites. So an ant having this sort of relationship with another insect isn’t all that strange. Some species of ants feed on the honeydew produced by aphids, small sap-eating mites. Nothing odd there. Until you look a little closer. Some species of ants are so reliant on their mites for food that they’ve actually taken up the role of shepherds. They’ll move the mites to the best grazing sites and even watch over them when it rains. The ants will delicately carry their herd around to ensure their safety. 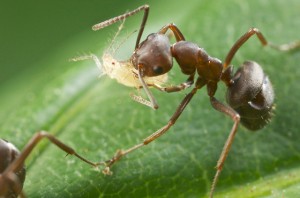 Everybody’s seen ants crawling along with chunks of leaves ten times their size (it even made it into the Lion King opening sequence), but you might be surprised to learn that they don’t actually eat those leaves. These workers are actually only one step in a much more complex process. Deep inside the anthill, other workers take those leaves, disinfect them with an antibiotic they produce naturally, and place them strategically in order to create compost and fertiliser for their fungus gardens. They tend the gardens constantly, and have become so good at it, that they don’t require any other food. They grow, cultivate, and harvest their fungus continually, always bringing in more and more greenery for it to eat, and even creating rubbish heaps for the inevitable waste produced. To put this into perspective, they are the only other animal in the world to do this other than us.

Leafcutter ants have also been known to harvest dried resin. It’s a dangerous job, and the ants can often become stuck, but the payoff is worth it. They use the resin as a natural antibiotic to disinfect the ants coming in from the outside that might be bringing disease with them. They are undoubtedly a complex agricultural society. It might just be a matter of time before we find ant art. 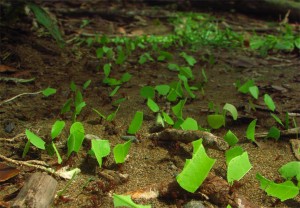 We’ve covered agriculture in terms of farming and keeping livestock, but ants have evolved another way of cultivating food. Honeypot ants have actually evolved into some of the weirdest little bugs on the planet. Workers will gather food and feed it to these specialised ants who serve as a larder. They store it for a rainy day, so-to-speak. The storage ants have amazing abdomens that expand as they’re fed more and more nectar. Their abdomen are clear, so it’s very easy to see the food inside, which is usually an amber colour, though a few scientists have had fun with these little guys, feeding the coloured sugar water for pretty little bug ornaments. 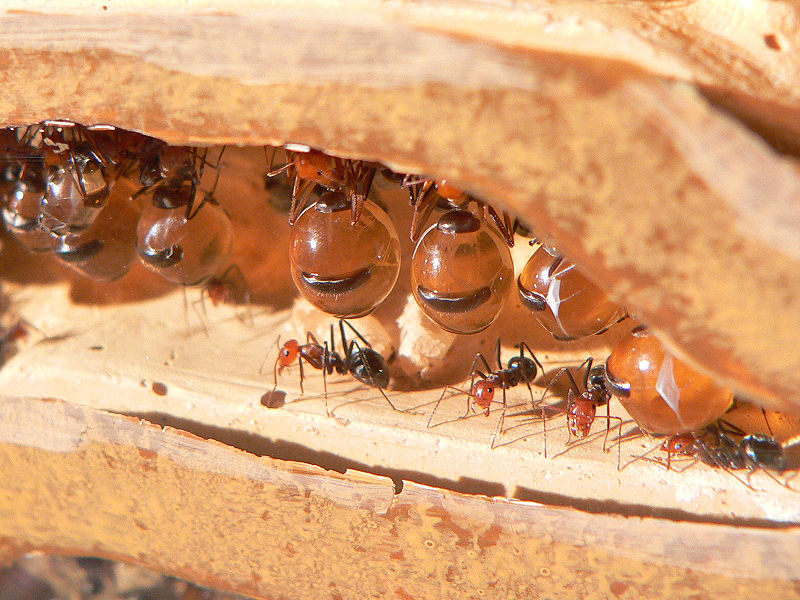 Not all ants are content to sit around tilling soil all day. Almost everybody has heard of Army Ants because of their aggressive behaviour. There are many species of army ant, and in fact, the name refers to the aggression more than just the species. These ants differ from other species in that they spend a good amount of their time wandering through the forest in huge legions. People have said that watching these ants on the move is like watching the forest crawl. They’re numerous, aggressive, and capture and eat anything in their path until it’s time for their queen to lay eggs again. These migrations are known as raids because of the violence and aggression involved. It’s scary how such small beings can ravage a forest. 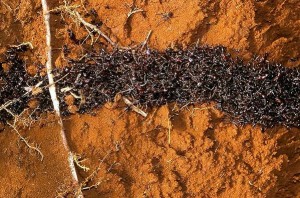 3.  Slave-making Ants
Ants forming armies might seem kind of cool, but maybe not as advanced as agriculture. Until you take into account that even those seemingly peaceful ants living in their sandy hills can start wars. Oh, and they start the wars in order to take prisoners and enslave them. The Slave-Making Ant, will raid the colonies of neighbouring ants, usually a closely related species, and steal up to 14,000 babies to raise as their own for future workers over the course of a season. So, that’s multiple directed attacks. That’s strategy and economics. Why waste your own calories on making babies when you can just grab a couple thousand of your neighbors? 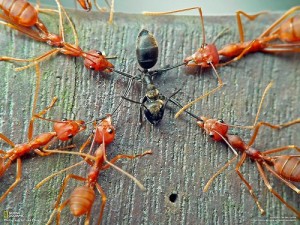 Some ants aren’t content with being prolific or super organised, or strategically similar to Genghis Khan. The next species on our list is just plain terrifying. The species Adetomyrma is rather vicious and capable, hunting for insects much larger than itself. It will take down prey like centipedes with relative ease. These felled behemoths won’t become meals for the adults though. Instead, they’re brought home to the larvae that greedily eat them. The adults then drink the blood of their well-fed babies. It’s an incredibly creepy life cycle, but as we’ve seen, ants don’t really care about your rules. Let’s hope, for the sake of the ant world, that these last two don’t team up. Baby-stealing-dracula ant somehow seems like a not-so-great evolutionary course. 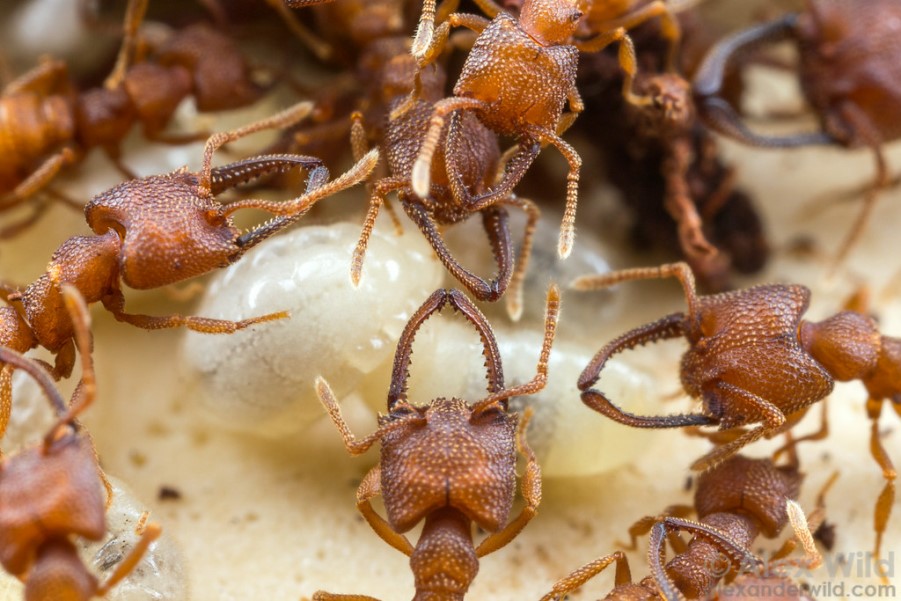 Finally, when they aren’t busy drinking the blood of their first born, ants are also capable of causing inordinate amounts of pain. The bullet ant is pretty famous because its bite literally feels like being shot. These critters are less than an inch long and still rate as one of the most painful animal stings in the world. That’s not all though! The duration is also impressive. These wonderfully frightening ants have earned themselves the name hormiga veinticuatro, or 24 ant – for the 24 hours of pain you can expect to go through once the little bugger decides to chomp.
Ants might not be slated to take over humanity, at least not until they get their zombie fungus situation sorted out, but they are still an amazing species and shouldn’t be discounted. Still, let’s hope they keep their ruthless creepiness to the bug world. 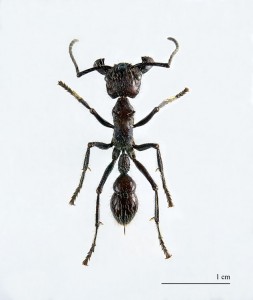 Top 10 Weird Mascots You Might Not Have Heard About

Tattooist With Black Eyeballs “Loves the Pain of Getting Inked”